Today’s article is a little different, mostly because we’re starting off with a (slightly conceited) story about an elf in a cyberpunk game I played: Eladriel.

If we’re being accurate, Eladriel wasn’t even an elf—he was a human posing as an elf, and unaware of it. The concept behind this particular shadowrunner was fairly simple, but got enormously complicated. Working with my GM beforehand, we created this elaborate history where in the end, an extremely anti-elf big-wig turned Jeff Branson (my PC) to look like an elf, and filled his mind with false memories of a very, very medieval history of elves.

As you can imagine, playing Eladriel was initially a great time. He carried around a “mithral” sword, used archery, wore “true elven cloaks”, spoke “real elfish”, and was the source of a great deal of hilarity. The aspect of memory-jacking, however, eventually started to get a little out of hand. Really digging into the polarity of something as complex as genuinely split personalities may seem like a simple thing in a comic book or planned, told story, but playing it out was another matter entirely. 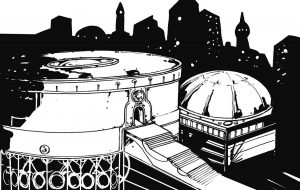 The more dire the circumstances got, the more trouble I had determining what he’d do—an “elf” in the most classical sense of the word, in the near-future fighting enhanced warriors, and with the instincts of a privileged socialite teenager. When the memory-jacking plot really got underway, poor Eladriel went right off of the rails and what was once an awesome character became an element of the game deprived of enjoyment.

1) Real PCs Really Develop
One of the mistakes I made with Eladriel was hinging so much on his fake history and glossing over his real history. Sure he had a few contacts, but I never thought about where he used to hang out and who might still recognize him outside of one or two individuals. The backstory of any character is important but if you’re roleplaying insanity of any kind, its value as a tool for story development multiplies. Not simply as a source (or potential way to overcome) a phobia or other mental malady, but also to provide greater depth to match the deeper engagement and player investment.

2) Genuine Motivations
Remember that backstory? What else would matter to your PC outside of their damaged psyche? Sure, fame and power and wealth are nice, but everybody knows Rosebud. This isn’t to suggest that your character should be single-mindedly nostalgic, only that you’re touching into greater depth with the addition of a condition that affects your roleplaying actions.

3) Comedy and Realism
Foolish, unlucky, intrepid, and countless other means lead characters to pratfalls, miscommunications, and comedic foibles. Don’t allow your character’s condition to be the source of humor, and be realistic. 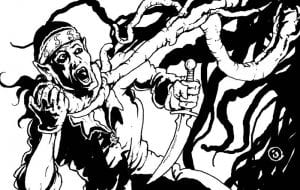 4) Goals. Have them.
If your PC is aware of their phobia or what have you, alleviating themselves of it might be the biggest thing on their plate. But if it isn’t totally debilitating (and if it is, you’re probably playing Paranoia) then surely they have other concerns and things they want to accomplish.

5) Insane /= Single-Minded
This touches on the earlier points, but is worth mentioning specifically. It’s easy to fall into the trap of making your character one-dimensional because of a type of insanity, and that should be warning enough not to do it. Remember that you’re playing a sentient thing that’s having genuine experiences, and that they’ll have genuine reactions. Sometimes their madness may be relevant, but not all the time!